This video demonstrates the surgical technique of orbital tumour excision. The patient had proptosis/protrusion of eyeball and downward displacement of the eyeball. The tumour was huge approximately 22x24x25mm which is larger than the eyeball size. The tumour had enlarged the bony orbit and the patient was explained chances of enophthalmos post op.
The long standing tumour had also compressed the superior rectus muscle.

The lid crease was marked first comparing with the other eye.
The surgery was performed using an operating microscope.

Lid traction sutures were taken with 5-0 mersilk. Superior rectus muscle was tagged with 50 mersilk suture. The orbicularis was dissected .The periosteum was exposed near the orbital margin .The orbital septum was opened near the orbital margin . The tumour was exposed by gently separating the orbital tissues. The supraorbital nerve is seen medially and was found to be wrapped around the tumour superiorly as it continued as frontal nerve. As the tumour was cystic ,I decompressed it by aspirating the contents so that there is more space available for dissection. The pupil was checked frequently during surgery to make sure there is no pressure on the nerve with the retractors or direct trauma. The tumour was gently held with a cryoprobe and removed. The nerve was separated from the tumour by blunt dissection before removal. The nerve is seen intact at the end of the surgery and also the superior rectus muscle was intact . The tumour bed was clean with no bleeders at the end of surgery. A capillary drain was placed and the wound closed with 6-0 prolene sutures.
For any queries on this, please feel free to contact us on watsap +91 9790996255 or email [email protected]

The Recovery Process of Blepharoplasty: What to Expect After Your Procedure? 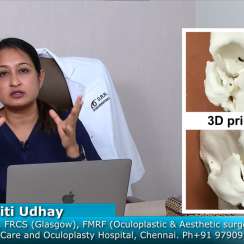